“Get out and mow the front yard!” A command that I probably heard my father boisterously announce more than a thousand times over the duration of my childhood.  For me and millions of other young boys who grew up in the previous century, lawn mowing is as much a part of Americana as baseball and apple pies.

Interestingly, lawn mowing is a relatively new invention for normal folks like us and its history is a bit more fascinating than you might think.

The word “lawn” can be traced back to the Celts of 1540 described a closed in grassy area as “luane”. Even before the invention of the word “lawn”, large yards were being constructed throughout Europe as a place of worship; however, they soon became a status symbol for the extraordinarily wealthy to showcase their economic power.  Areas where grass was trimmed and well manicured gave evidence of the landowner’s affluent status, highlighting that they could afford to keep land that was not being used for a building, or for food production.

In addition to highlighting the owner’s ability to “waste land”, these lawns required armies of servants and slaves to maintain the grounds — scything, shearing and even rolling the grassy areas to achieve the perfect look.

No where was this more noticeable than at the gardens of Versailles, which included a lawn known as tapis vert, or “green carpet.”

While the nobler gentry back East and across the ocean were busy overseeing servants tasked with maintaining fancy lawns, the early settlers of Appalachia were not afforded such luxuries.

Instead, the descendants of pioneers opted instead to rid the area directly around their cabins of all grass altogether.

“Back when I was a kid, there wasn’t a single blade of grass growing in our front yard. Between us kids playing all day and my mamaw sweeping the front yard on a daily basis, grass didn’t stand a chance at growing,” recalls one Appalachian Magazine reader.

But why?  Where did this classically southern tradition come from and why would women take the time to painstakingly sweep their yards each day in generations past?

A 1993 article that first appeared in the New York Times set out to answer this question, with writer Anne Raver stating, “Blacks here, descendants of slaves brought mainly from West Africa to work the cotton fields in Georgia’s hard clay, are carrying on the traditions that their ancestors brought from the Gold Coast… And the swept yard was the most important ‘room’ of the household, the heart of the home. Slave quarters were cramped and hot. So you washed and cooked outside, and when the meal was over, everything could be swept into the fire.”

According to the article, the custom quickly grew into mainstream throughout the South and soon, “Almost everybody had swept yards, including the plantations, which were swept by slaves or servants…”

Turns out, the idea of lawn sweeping grew out of practicality as much as anything.  In an era long before Cub Cadet and John Deere, keeping one’s lawn free of overgrown weeds was a tall order.

With heavy populations of venomous snakes ranging from the Appalachian Mountains to the South Carolina low country, the fear of having their homes (which weren’t sealed off very well to begin with) invaded by an unwelcomed serpent led the nation’s inhabitants to take some pretty drastic measures — sweeping their yard.

By sweeping their yards down to the dirt, early homesteaders were able to establish a perimeter around their homes which would ensure a safe play area for their children, as well as provide an indicator as to whether their dwelling places had been visited by a snake.

Often, it was the job of the children to go outside and circle around the house each morning, checking for snake tracks.  If the tracks led to under the home, the entire family would put everything they were doing on hold until the snake was found.

This was common practice throughout most of America’s history, well into the 1900s. 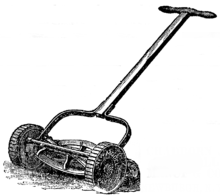 1830, Englishman Edwin Budding invented the first lawn mower, an iron frame that would be pushed from behind, containing gear wheels that would transmit power from the rear roller to the cutting cylinder, allowing the rear roller to drive the knives on the cutting cylinder — overall, this invention remained relatively unchanged for more than a century.

As Americans became more affluent in the years following the Great Depression, gasoline powered mowers replaced the 1830s design of the push from behind cutting cylinder.

Though it took centuries for European colonists to fully embrace the lawns of Europe, America’s grassland was changed almost as soon as the first colonists stepped off the boat at Jamestown.

Believing the grasses of America to be inferior to those of England, colonists soon began bringing hundreds of pounds of grass seed from the old world with them — unbeknownst to them, however, included in these seed bags were also tiny fractions of dandelion seeds.

“Once out of the bottle… the genie proved uncontrollable,” writes Nature North.

Having no natural predator, the invasive species thrived in the new world, moving westward at a dizzying pace, reaching the Pacific Coast centuries before the same land was ever settled by the descendants of the individuals who first introduced the plant to the New World.

As settlers moved west, they were greeted by a European immigrant that had reached the unsettled lands west of the Mississippi long before their arrival — the dandelion.

Embracing the plant, American pioneers used the dandelion to make wine and dye, season salads, and even to serve as a coffee substitute when baked and ground.

Today, the dandelion is one of the few plants found in all 50 states and is even encouraged in pastures, acting as an important source of food for cattle and sheep.

So the next time you’re ready to tackle that innocent smiling child who is on the brink of scattering dozens of those lighter than air seeds with one sharp exhale of their lungs, just keep in mind that long before you were ever born, dandelions had subdued the entire continent, including a countless number of American lawns.

Dog Days of Summer: The Days when Humans and Animals “Go Mad”

Dog Days of Summer: The Days when Humans and Animals “Go...

The History of Appalachian English: Why We Talk Differently

Why Stink Bugs Are Taking Over the Eastern United States

What We Lost When We Lost Our Hymnals

By commenting, you are agreeing to Appalachian Magazine's comments policy, which includes receiving periodic updates via email. We promise to never share your contact information to members of a third party.